Where Do Broken Hearts Go?

A few weeks ago I went to a Sisterhood lunch hosted by my friend Robin and everyone there wrote out goals and their vision for their personal endeavors for the year. One of my goals was to blog at least once a week. I’ve been doing pretty well until this week.  And I realized I’ve been so busy and so mentally exhausted  that I can’t think of anything that I want to use the little energy I have to write about. So in order to keep with the promise I made to Robin and the group, I’d write about the only thing I’ve been consumed with this week. Death. And this week I feel like I’m dying of a broken heart.

Last week, a good family friend, and civil rights activist, Patricia Stephens Due died.  CNN, the NY Times, the Miami Hearld and others reported on the death of a woman who helped lead America’s first jail-in. They shared with the world, how this brave woman stared down police officers and police dogs to help us gain the freedoms we have today as African-Americans.  The woman who married her love one day in 1963 and for their honeymoon rode the train to Washington D.C. to hear Dr Martin Luther King give his “I Have A Dream” speech. 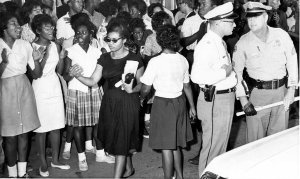 And even after reading all of the amazing words journalists around the country were writing about Mrs. Due, all I could think was a week prior I was sitting at the bedside of a woman who was one of my “earth mothers”. See in our family we have “birth mothers” and “earth mothers”. Ms. Due, one of my earth mothers, was charged with helping to guide me in the world, give me a sense of history, show to be an asset to my community and my country, and to be alll that my parents expected me to be.  And there was never an encounter with her that I wasn’t passed along a nugget of history and a task for the future. The dark glasses and perfectly coifed, silver toned bun that were her signature looks were now gone.  Her physical strength and size had dwindled as a result of her fight against the thryoid cancer that would eventually take her life.  She seemed to be resting comfortably yet preparing to leave this world. And Johnita, her daughter, told me that her mom would probably be sleep throughout my visit and didn’t have many moments of alertness but would appreciate my stopping by. Well I went. And I sat. And I sang freedom songs with her sister at her bedside. And at one point NaNa (Ms. Due’s sister Priscilla Stephens) said “Pat! Pat! Open your eyes! La’Keitha is here to see you. Pat!”. And she did. It was brief, but her eyelids fluttered open almost screaming “Here I am. Thank you for coming. I love you.” I don’t think I’d ever seen death so close up. And I don’t think I’ll ever be the same. And I am eternally grateful for that flicker of life she showed me. Reminding me that I must fight to show love and preserve life even in my last days.

And then as if things weren’t sad enough, WHITNEY HOUSTON dies!! And I don’t know about anyone else, but as the days after her death eeked along, I felt more and more like I had truly lost a piece of myself.  I know it sounds silly because Whitney was a celebrity whom I never met. But the truth is, I grew up on Whitney and at EVERY SINGLE MOMENT IN MY LIFE, Whitney was there. 6th grade dance theme was “One Moment In Time”. And who didn’t sing “Greatest Love of All” for a middle school talent show. “Count on Me” was the theme for my Debutante trip in the 12th grade. I remember playing “My Name is Not Susan” in the phone to a boy who called me someone else’s name one day (I’m dying laughing just thinking about that!).  Even as an adult “Where Do Broken Hearts Go” is always my go-to break up song, followed by “It Hurts So Bad” to force the tears to come so I can grieve and move on.  I have woken up every day this week singing Whitney. And yes she had life struggles as we all do. And I don’t care one iota. “The Voice” is gone. There will never be another. And it has consumed me.

The moral of this rambling story is share love and life with those you care about on a daily basis. Because you never know when your last day is upon you. My mom always tells me “I want my flowers now because when I’m dead, I can’t enjoy them.” The day Ms. Due died, I sent my mama flowers. Because I wanted to make sure she had her flowers now.

I went to college and majored and Mass Communications/Public Relations but decided to take my passion for promoting others to law school....where i could then learn to promote MYSELF! Kidding. Kind of. Now I'm a lawyer. 8 years later, big whoop and womp womp.
View all posts by Sweet Nothings →
This entry was posted in My Sweet Nothings and tagged Pat Due, Patricia Stephens Due, Whitney Houston. Bookmark the permalink.

3 Responses to Where Do Broken Hearts Go?