I’m no proponent of the death penalty. Never have been. Mostly because of how it is disproportionately given to black males for crimes against white women. I even wrote my Law School Independent Study on the topic, if you ever care to read it (or I ever care to dig it out). But since my graduation 8 years ago, no case has screamed “INJUSTICE” louder than the case of Troy Anthony Davis.

If you don’t know who this is or why his case is important, keep reading and then I’d love to hear your thoughts on our country’s creed about “justice for all”.  Troy Anthony Davis has been on death row in Georgia since his conviction in 1991 for the murder of Savannah police office Mark MacPhail.  Davis and his attorneys continuously argued that David had been falsely identified as the murderer.  Nevertheless, he was convicted and sentenced to death.  Through a series of appeals that spanned the course of over 15 years, the U.S. Supreme Court in 2009 ordered the U.S. District Court for the Southern District of Georgia to consider and rule on whether new evidence “that could not have been obtained at the time of trial clearly established [Davis]’s innocence.”  (Read Supreme Court decision)

Since 1996, over ten witnesses in this case have recanted either part or all of their testimony. Recanted. Meaning, took it back. Meaning, my bad, I got it wrong. For example, Dorothy Ferrell, in a sworn affidavit stated that she felt under pressure from police to identify Davis as the shooter because she was on parole for a shoplifting conviction and that she “told the detective that Troy Davis was the shooter, even though the truth was that I didn’t know who shot the officer.” Years later, Darrell Collins wrote that the police had scared him into falsely testifying by threatening to charge him as an accessory to the crime, and asserted that “I never saw Troy do anything to the man.” Several other witnesses signed affidavits saying that their earlier testimony implicating Davis had been coerced by strong-arm police tactics. Other witnesses also signed affidavits saying that another man, Redd Coles had confessed to the murder to them.  So everyone is changing their story. Police intimidation.  Hidden evidence. Missing pieces now found. What does this mean? Too much doubt.

The Court Got it Wrong

During that June 2010 hearing on whether evidence clearly established his innocence, two witnesses said they falsely incriminated Davis, and two others said another man had confessed to being MacPhail’s killer in the years since Davis’ trial. U.S. District Judge William Moore said the testimony cast some doubt on Davis’ conviction, but was not enough to grant a new trial. Some doubt. When dealing in death, or the death penalty, ANY doubt is too much.  What kind of society do we live in where we can send someone to meet their maker on a hunch or a guess or a crapshoot. Maybe he did it. So kill him just in case.  That can’t be real. That can’t be life.  That can’t be justice.  What kind of world do we live in where we gamble with the lives of people in the name of justice.

All Hands on Deck

People from all across the globe are now lobbying for the stay of execution.  Former jurors in the case have said publicly and in sworn affidavits that had they known then what they know now they NEVER would have convicted Troy Davis.  President Jimmy Carter, Archbishop Desmond Tutu, Pope Benedict XVI, Congressman John Lewis along with a host of celebrities have all written, called and petitioned for the courts to spare the life of Troy Davis. For all of the unworthy causes that people use their celebrity for, this is one that many more should be getting behind.  But not just celebrities, but all of us regular citizens should be up in arms and outraged about this miscarriage of justice.  We should be walking the streets of Atlanta, Boston, San Francisco, Houston and New Orleans.  We should be holding vigils on the courthouse steps in Savannah, lighting candles in courtyards in Cambridge, and having sit-ins outside the Supreme Court in Washington D.C.   On Thursday, September 15th, NAACP Georgia State Conference President Edward Dubose led a delegation of representatives from the NAACP, Amnesty International and others to deliver more than 660,000 petitions in support of Clemency for Troy Davis. 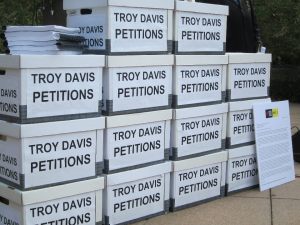 Tonight, September 16th, a rally/march will be held in Atlanta at Woodruff Park in solidarity for Troy Davis.  If you are in Atlanta or nearby, come out and make your voices heard. The world is now watching the state of Georgia and waiting for justice to be served.  Join the fight. Call and write the Georgia Board of Pardons and Paroles. They are the only ones with the authority now to halt the execution of Troy Davis.  Email and write to the District Attorney of Chatham County asking him to withdraw the death warrant and take the bounty off of this innocent man’s head.  Facebook and tweet your support for this effort using the hashtag #TooMuchDoubt.  Let your voice be heard.  We cannot afford to have this man be executed while we sit idly by with our hands and legs crossed in apathy. The Board of Paroles and Pardons meets on Monday September 19th to consider this case. LET YOUR VOICE BE HEARD!

I went to college and majored and Mass Communications/Public Relations but decided to take my passion for promoting others to law school....where i could then learn to promote MYSELF! Kidding. Kind of. Now I'm a lawyer. 8 years later, big whoop and womp womp.
View all posts by Sweet Nothings →
This entry was posted in Calls to Action and tagged Clemency, Death Penalty, Execution, Troy Anthony Davis, Troy Davis. Bookmark the permalink.