In Contempt of Couture: Red Bottoms Be Gone!

Some say imitation is the highest form of flattery. Some say fake it till you make it. Well, Christian Louboutin isn’t pleased with Yves Saint Laurent and has sued the iconic fashion house, accusing it of selling shoes “with red outsoles that are virtually identical” to Louboutin’s. 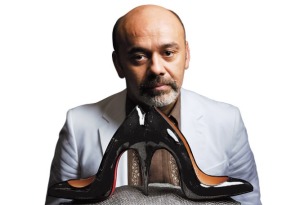 YSL’s shoes “threaten to mislead the public,” according to the complaint filed by their rival fashion house back in April. Unfortunately, yesterday a U.S. District Court judge rejected Loubiton’s request for a preliminary injunction stopping the sale of any red bottomed YSL shoes.

Now if you have no clue what a Louboutin is or is wondering why companies are fighting over the color of the bottom of their shoes, you aren’t alone so I’ll give you
deets.  Christian Louboutin introduced his famous shoes in 1992 and trademarked them in the US in 2008. Sales of his infamous red bottoms are estimated to be $135 million this year alone.  For some reason that seems low to me since the average pair of Loubs that I’ve ever desired has been well over $1000. These shoes range from $500 to $5000. That is NOT an exaggeration. It is fact. Ask Neiman Marcus. Celebrities, real and fake, make it a point of wearing their Louboutins and letting everyone know it! Sarah Jessica Parker even helped to market the brand as a luxury shoe on Sex and the City in addition to her love of the Mahnolo Blanik. Ever paid attention to the bottom of Oprah’s shoes when she was is doing an interview on the Oprah Winfrey show. Most of the time they were unscuffed red bottoms.
Loubs. I coveted many a pair, many a day. They have even been known to start romances. For the Basketball Wives fan out there, you will recall Chad Ochocinco sent his now fiancé  Evelyn Lozada a pair of Louboutin as his first “I want to get to know you better” gifts after meeting her on Twitter. These shoes are the real deal Holyfield. Do I own a pair? No. Would I like to? Yes (paymasters and sugardaddy’s please apply).

Lawyers for YSL tried to argue that red has been a signature color for them since the 60’s and that they have been using it on the sole’s of its shoes since 2004. The shoes at issue are specifically the Tribute, Tribtoo, Palais and Woodstock styles. The red shoe below is one of the shoes that stepped on Louboutin’s toes….so to speak. On the left is the Black Louboutin with the famed red bottom. 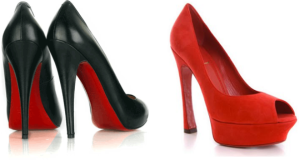 The judge ruled that all of the charts and facts YSL put forth regarding the history of their red usage was unreliable but at the end of the day rejected the petition for an injunction.  In his opinion, Judge Victor Marreo ruled, “Because in the fashion industry color serves ornamental and aesthetic functions vital to robust competition, the court finds that Louboutin is unlikely to be able to prove that its red outsole brand is entitled to trademark protection.”   The battle isn’t over. Both sides will be back in court next week where Louboutin will have to  persuade a judge not to cancel their trademark. Louboutin claims that it is only one particular shade of red that they are claiming the rights to but if you ask me, its probably going to be a long shot. I’m not an Intellectual Property lawyer though so if any of you are, feel free to comment and tell me why I’m wrong. But trust that regardless of the way it comes out next week, both of them will be laughing and walking (in 5 inch stilettos) all the way to the bank.

But the real winner in all of this? Bootleg man. Red Bottoms for $25 coming soon to the video store or hair salon nearest you! Gotta love America, the land where dreams come true!

I went to college and majored and Mass Communications/Public Relations but decided to take my passion for promoting others to law school....where i could then learn to promote MYSELF! Kidding. Kind of. Now I'm a lawyer. 8 years later, big whoop and womp womp.
View all posts by Sweet Nothings →
This entry was posted in In Contempt of Couture and tagged Christian Louboutin, Victor Marrero, YSL. Bookmark the permalink.

2 Responses to In Contempt of Couture: Red Bottoms Be Gone!