Casey 3.0–The Mac versus PC

So many friends, old and new, have been weighing on the Casey Anthony trial and making friendly bets on what the verdict will be.   One of my middle school buddies, a Florida lawyer even wrote a blog about it you should read: www.sublimedigressions.blogspot.com

After watching today’s epic closing arguments (in length and substance), one thing is clear–this is a battle for the ages.  And in true David versus Goliath form, inept back asswards defense attorney Jose Baez tried his best to throw stones and slay the giant known as Jeff Ashton. But unlike David, Jose Baez failed in his attempt.  The prosecution eloquently laid out Casey’s lies and showed the jury how “Casey 3.0” tried to fix her parent problem by killing her adorable two year old baby.  And they did it masterfully. Clearly Ashton is a Mac and Baez is a Dos-running P.C. The only thing I would’ve done differently (as pointed out by my friend and former Brooklyn prosecutor Shannon) was to go through the each element of the crime and point the jurt to the exact piece of evidence that proved that element.  At many points during the closing argument I thought Jeff Ashton might burst into tears and shout “YOU KNOW SHE DID IT. WE ALL KNOW SHE DID!” but alas the dramatic flair was saved for the defense presentation. After about 70 minutes, the prosecution was done and up came Jose Baez for what turned into a 5 hour long presentation, full of hooping and hollering. Much like Easter Sunday in a Black church, there was shouting, spitting, and had we been able to see the jury, someone very likely fell out (from the sheer hyperbole in it all). Lord knows I did.  Baez kept hitting poster boards into his microphone, stumbling over his words, repeating himself over and over and over all to what end? He tried to weave his theme of Fantasies and Frauds and in the end, I believe he dug himself an even deeper hole.  He tried to throw George Anthony under the bus, claiming he was the one who hid Caylee’s body and all he had to show for it was sum Ohio made duct tape.  He then tried to discredit Cindy Anthony, who HE put up on the stand to explain the computer searches for Chloroform. Oh, a mother’s love. That love may in fact send Cindy to the Big House for 15 years for perjury. He argued “the Prosecution’s entire rebuttal case was to prove Cindy was a liar. Well we told you from day one she was a liar. This is a family of liars.” Really sir?! Talk about changing the game in the 9th inning. We know this is a hard case to argue. I don’t envy anyone on that defense team.  Facts are stubborn things. They can’t be changed. You have to play the hand you are dealt and do so with vigor. But c’mon  son.  Stick with one theory and go with it.

Sidenote: How I knew Cindy Anthony was lying—When she said it would be nearly impossible for her work computer to tell us whether or not she was at work that day. Huge assumption Cindy. See I used to be an in-house lawyer. I have written and destroyed many a document retention policy.  There are even LAWS to discuss how long companies have to keep certain information.  Salary information and personnel records are one of the  documents that have to be kept for a LONG time. So for an hourly worker, your salary is tied to the number of hours you work….which means there is a RECORD of when you clocked in and clocked out Cindy.  Emails that you wrote three years ago may not be on your computer anymore but they are very likely on a backup tape in an offsite storage facility. Note to companies: email retention policies should be as SHORT as
legally possible for this particular reason! Not too short lest you be accused
of spoliation (destroying evidence) but just long enough to keep you out of
trouble for stupid things your employees will write or admit to via email.

Back to business: If I were trying this case, which I am in the court of Facebook, I would have argued one alternative theory.  They can still get to the 1st degree murder charge WITHOUT showing premeditation.  They just need to go the felony murder route–that the child died while in the commission of a felony–that felony being aggravated child abuse. And the child abuse was drugging Caylee with the Chloroform to go to sleep.   On Nancy Grace tonight, a caller pointed out that in all the pictures of Caylee, she has dark circles around her eyes. That could be evidence of poor sleep or sleep patterns which could be because mama was chloroforming her to bed every night. And on the night of June 15th, she gave her a little bit too much. She was upset after fighting with her mother and she wanted to just go out and blow off steam and she put a tad too much chloroform on the cloth. And thats where the child abuse charge comes in and thats how we get to felony murder and a conviction on murder one.  Don’t get me wrong. I am not a proponent of the death penalty. I actually did my law school independent study on the reasons why the death penalty was unconstitutional under the Eigth Amendment as cruel and unusual punishment.  But this woman should spend the rest of her life in jail living “Bella Vita”, the beautiful life of orange jumpsuits and biweekly showers. 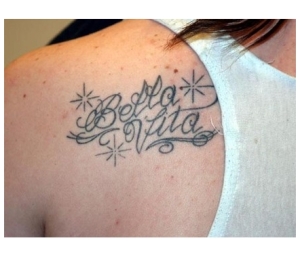 Tomorrow we hope to see an effective rebuttal and this case sent to the jury. I will make my prediction. The jury will be out for no more than 24 hours. They will return a verdict of guilty but NOT 1st degree murder (unfortunately). I hope that I’m wrong. I hope they come back after 3 hours of deliberating and find her guilty of the premeditated murder of her child.  But its a tough road to hoe. Juries want answers.  And this case will end with more questions than answers. The funniest one from today being from Mr. Baez, “Who cut the cheese.”

I went to college and majored and Mass Communications/Public Relations but decided to take my passion for promoting others to law school....where i could then learn to promote MYSELF! Kidding. Kind of. Now I'm a lawyer. 8 years later, big whoop and womp womp.
View all posts by Sweet Nothings →
This entry was posted in Casey Anthony Trial and tagged Casey Anthony, Caylee Anthony, legal. Bookmark the permalink.

2 Responses to Casey 3.0–The Mac versus PC